vergen: boredpanda: People From Classic Paintings Inserted Into Modern City Life this is my favorite thing 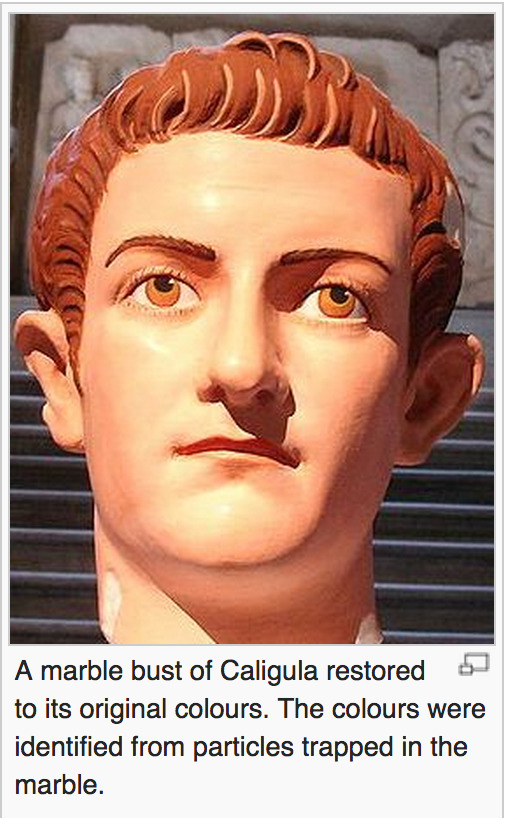 it looks like a cheap theme park ride mascot

here’s a statue of Augustus

“I tried coloring it and then I ruined it”

And you know what the funniest part is? The paint didn’t just wear off over time. A bunch of asshole British historians back in the Victorian era actually went around scrubbing the remaining paint off of Greek and Roman statues – often destroying the fine details of the carving in the process – because the bright colours didn’t fit the dignified image they wished to present of the the cultures they claimed to be heirs to. This process also removed visible evidence of the fact that at least some of the statues thus stripped of paint had originally depicted non-white individuals.

Whenever you look at a Roman statue with a bare marble face, you’re looking at the face of imperialist historical revisionism.

(The missing noses on a lot of Egyptian statues are a similar deal. It’s not that the ancient Egyptians made statues with strangely fragile noses. Many Victorian archaeologists had a habit of chipping the noses off of the statues they brought back, then claiming that they’d found them that way – because with the noses intact, it was too obvious that the statues were meant to depict individuals of black African descent.)

There’s a lot of good academic discussion about chromophobia in modern Western aesthetics and how it links to colonialism.

a couple of general points:

1) the reason the reconstructions here look like “the leftover templates of gaudy pieces of theme park shit” is because they’re reconstructions. this is not actually what these statues looked like, and in my opinion they do roman art a massive disservice. the reason they look so “gaudy” (which is actually the exact same colonial attitude that led directly to the literal whitewashing of graeco-roman art, nice, very nice) is because the colours have been applied flat, with no shading or blending to give the impression of shadow. looking at contemporary roman portraiture, it’s clear that they did actually have quite a sophisticated grasp of shading and colouring, and to imagine that they would just suddenly forget how to do the dark bits when they were painting on stone is ludicrous. for context, this is a portrait of paquius proculo, a fresco from pompeii, dating from around 20-30AD, ten years earlier than that bust of caligula:

(also of interest in this regard are the fayum mummy portraits, dating from the second century AD; again, although they are of varying quality, the best of them demonstrate a clear understanding of shading. for example:

and, to be honest: do you really think a civilisation that produced this

just, what, didn’t get paint? these reconstructions are laughable, not because they’re colourful but because they’re presenting an incredibly sophisticated culture as unable to understand simple artistic concepts; something that i think itself contributes to the idea of colourfully painted statues being ‘silly’ and ‘gaudy’, which again is an incredibly colonially-influenced idea.

2) the reason graeco-roman statues are often missing the noses is because most excavated statues are generally missing the noses. they are fragile. the head of a statue is basically a football with details; the nose is the only protruding part and is comparatively narrow and thin (as opposed to, say, an arm or leg, which takes more force to break off but is still very much detachable, c.f the venus di milo) and is very, very easy to break off. although i am absolutely the last person to deny the racism that has been present in classics, the noses thing is really not a great example.

Many sculptures from antiquity were defaced during the early Christian period. During riots, Christian mobs would smash the noses off of ‘pagan’ sculptures, as they usually depicted pagan gods, or emperors, and depending on the sect, any depiction of a person could be considered ‘graven’.

The hotbed of Christian zealotry was Egypt. Throughout its time as a Roman, and then ‘Byzantine’ province during its early Christian history, the province proved practically unmanageable due to its Christian theological riots, with the majority of the population not following Constantinople’s doctrine and theological orders.

This Roman bust of Germanicus at the British Museum was defaced – nose smashed off – during a riot that would have taken place in late antiquity in Egypt, so, 400-500AD [also, note the cross etched into forehead]

Probably the most known example of this is the destruction of the Alexandrian Serapeum, a vast temple complex in Alexandria, Christian mobs tore the temple apart, destroying and looting, tearing it down brick by brick.

Another example, outside of Egypt, is the Nika Revolts in Constantinople. On its creation as a co-capital of the Roman Empire, an unfathomable amount of art and sculpture was brought to adorn the New Rome, and during the revolt, for the most part this cream of the classical crop was destroyed, again, by theological mobs.

After Egypt’s conquest during the Arab-Islamic conquests, this practice would have continued. In fact, theologically, many of Egypt’s Christian sects were more in line with Islamic theology than what became mainstream Christianity in both ‘Orthodox’ and ‘Catholic’ doctrine.

I like this version of the thread. It has actual history in it not just “Victorian assholes” did it (which this thread also seems to be the only thing I ever see about Victorians removing paint from statues). 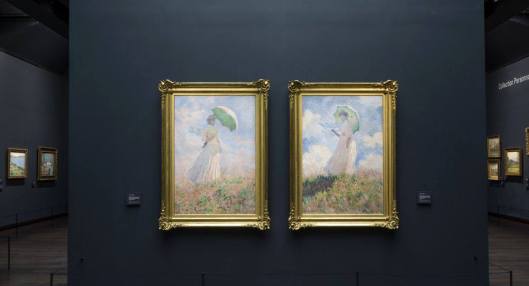 They had not been seen together in the museum galleries for quite a while. Monet’s “Women with Umbrellas” are once again side by side in the Impressionist gallery.

AND THEN THEY LIVED HAPPILY EVER AFTER THE END!!!!

ok every time this post comes by i resist geeking out on it but NO LONGER
so these women are probably the same woman and that woman is monet’s wife camille doncieux. he painted her a LOT.
but fun fact: monet had this asshole friend named ernest hochede, and ernest racked up some debts, and like an asshole he basically just fled the country, leaving his wife alice and their six kiddos behind. monet immediately got alice and kids to move in with him, camille, and their two kids.
at this point, monet, alice, and camille became my favorite probably historic poly threesome. they lived together, taking care of the kids. they were so poor that alice and camille took turns wearing the nice dress so they could go out with monet.
when camille got uterine cancer and began dying, alice helped monet cope and took care of things while he painted camille over and over. when camille died, alice is the reason monet was able to survive.
when ernest finally died, monet and alice married, and remained married until alice died. at that point, blanche, the oldest daughter, took care of monet until he died.
anyway, the point is, the umbrella ladies are probably the same ladies, but as far as i’m concerned, there WAS a historically queer poly family in that household and they were wonderful.

Honestly, poly households sound like a win-win situation where parenting is concerned. I don’t understand why people are so against it. It takes a village.

Ugh, this makes me so happy. I know a handful of poly families who are raising amazing kids, and it just… makes me so jealous and hopeful at the same time 😛 Also, Monet has always been my favorite, so it’s impossible to love him more, but… yeah. Those are beautiful photos…

I’m saying. These dudes are awesome

The composition, and the LIGHTING, and the grunge… lovely

I love how these guys took a classical art form and remade it with a modern lens.  The color, lighting and expressions are truly stunning.